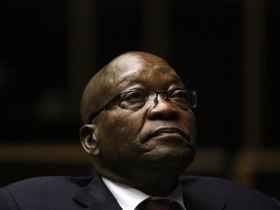 The endorsement by former president Jacob Zuma of his ex-wife, Nkosazane Dlamini-Zuma, as his preferred presidential candidate has angered his loyal Radical Economic Transformation (RET) forces.

On 12 September Zuma reportedly told suspended ANC secretary general Ace Magashule and his delegation in Nkandla that he hopes they will rally behind Dlamini-Zuma in the presidential race.

The RET faction will be heading to Nkandla on Sunday to seek clarity on the matter ahead of the 55th ANC elective conference.

Participants on the Friends of Jacob Zuma Whatsapp group want Zuma to distance himself from his ex-wife as they believe she has been pro-Ramaphosa since 2017 after the Nasrec elective conference.

“We note the rejection of mama Zuma by the forces. To me she’s out. Despite whatever history comrades might be having about Lindiwe Sisulu, she has at least come out openly on the [faults] within the ANC including her posture of late that’s leaning very much towards the RET forces and policies if you like. She has had the guts to join us in Nkandla when it was not fashionable to do so,” said one participant.

RET spokesperson Nkosentsha Shezi confirmed to Scrolla.Africa that they are indeed going to meet the former president as their champion to discuss certain issues on Sunday.

However, “when we talk about ANC candidates we do that as members of the ANC in good standing to our branches, not as the RET faction”, said Shezi.

In 2016 Zuma told his clan in Greytown during the commemoration of activist Florence Matomela that the ANC should be kept in the Zuma family and in Nkandla.

At that time, ahead of the Nasrec elective conference, Dlamini-Zuma was still campaigning for the ANC presidency.

Mzwanele Manyi, spokesperson for the Jacob Gedleyihlekisa Zuma Foundation, told Scrolla.Africa that they don’t comment on political issues because they belong only to Zuma.